Madurai club, the story behind... 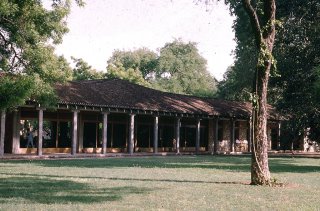 
The Madurai Club is an architectural master piece by Architect Geoffry Bawa .Most people in Madurai itself may not know that a contemporary architectural work of such high standard exists in their city. Heres the story of how it all began...


Martin Henry was appointed general manager of Madurai Mills (Madura Coats and now Coats Viyella) in 1970. At the time the large thread-making company based in and around Madurai ran two staff clubs: the Madurai Club in the centre of the town was exclusively European , while the Garden Club in the suburb of Kochadai was for Indian staff . 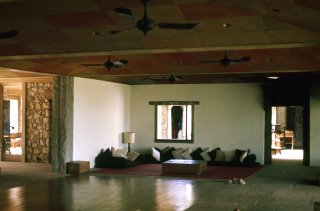 Henry resolved to turn the Garden Club into a single meeting place for all his senior staff, and after sharing a drink with Bawa, asked him if he would be the architect for the new club. Bawa travelled to Madurai on 24 July and stayed two nights with the Henrys, visiting the site, collecting survey drawings of the existing buildings and subjecting Henry to 24hours of intensive grilling. 3 weeks later he returned to Madurai with a full set of design proposals. At this point Henry added one further stipulation: the new club should be built entirely from materials found within 10 kilometres of the site. Bawa rose to the challenge and proposed that the structural columns should be of honey-coloured stone quarried from the local Nagamalai Hill and that stone slabs from an old mill should be used for the floors. 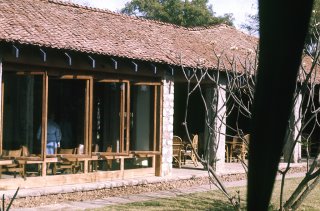 (the windows of the Bar)

The project went on hold for almost a year while Henry wound up the old club and disposed of its buildings, so Bawa's next visit to Madurai took place in April 1972. On this occasion he and the Henrys travelled up to Karaikudi, where they agreed to break their self-imposed 10-kilometre rule and bought 2 old Chettinad doors, a set of 4 old carved stone columns and a miniature temple cart, all of which were incorporated into the new club. Work finally started on site in January 1973 and the completed building opened in January 1975. 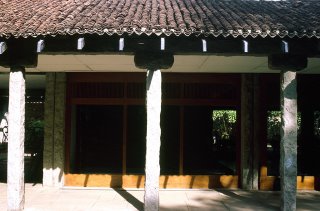 The merging of the two clubs brought Western and Hindu traditions into direct confrontation and was not without its complications. A mixed club needed a bar but this had to be hidden from the direct view of the teetotalars , while the restaurant needed two kitchens, one for vegetarians and one for non-vegetarians. 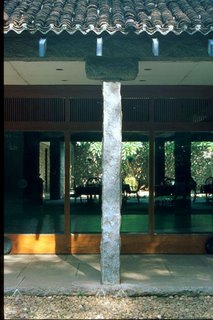 (stone pillar)
The residential accommodation had to be segregated from the club proper, and the billiard room was to be treated as an inner sanctum. In response to these requirements, Bawa's design converted the old Garden Club into a set of seven 'chambers' grouped around the billiard room. A new wing containing the bar, a lounge, a restaurant, a library and a dance floor comprises a group of pillared pavilions placed around three internal courtyards under overhanging pitched roofs. 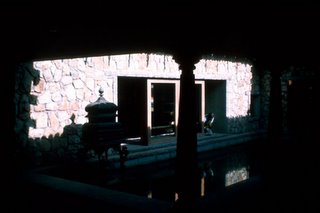 Although the design is deceptively simple, it succeeds through the subtlety of its spatial organization, the care with which spatial hierarchies are set up and the connection of exterior, interior and semi-interior spaces through axial views. 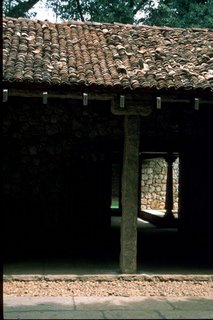 (vernacular architecture at its best)

The entrance, marked by a pair of wrought-iron gates and offering an immediate cross-vista through the club towards the garden, leads into a lobby where the visitor turns to encounter the long vista past the pool court through the restaurant towards the ping-pong verandah and the tennis courts. The pool court is punctuated by a set of old Chettinad columns and the pool is fed from a small fountain that gurgles from under the hood of an Indian temple cart. The walls are of random rubble, the columns of rough-hewn stone from a local quarry and the roofs of clay tile on corrugated cement sheeting. Close inspection reveals a minor order of single columns supporting the outer verandahs and a major order of composite columns made up of four quadrants of split stone set around a reinforced-concrete core and acting as the main structure. Large windows are set within stone jambs and sills, while smaller windows sit in monolithic stone frames, and glass door panels run on large brass wheels. The vaulted ceilings of the main restaurant and lounge areas are formed from coloured panels of locally produced handloom.
Its a pity that this masterpiece is one of the "items" in Madura Coat's "for sale" list...I wish I had 1 crore rupees right now....source : Robson, David. 2002. Geoffrey Bawa: The Complete Works. London: Thames and Hudsoncourtesy : archnet
Posted by ashok at 7:07 PM