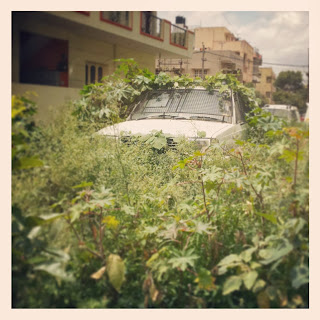 Obviously, Someone had forgotten where he parked his car....!

This scene reminded me of a Tamil folklore of the legendary Paari , a 9th century Tamil Chola king.  In Tamil Nadu  a standard exam question for elementary school kids is – “What did Paari do?”, and the reply being “பாரி முல்லைக்கு தேர் கொடுத்தான்” (i.e. “Paari gave his chariot to mullai ”).
The story goes that one day as Paari was going through a forest on his golden chariot, he stopped near a stream to quench his thirst. When he returned he found that a mullai plant (a wild jasmine creeper) had entwined itself around one of the wheels of the chariot. To move the chariot would mean to break the tendril. So Paari  actually gave his golden chariot to the plant to creep and walked back to his palace. He became known for his love for nature and his philanthropy till this day and is known as Paari-vallal.

Email ThisBlogThis!Share to TwitterShare to FacebookShare to Pinterest
Labels: Humor, Views and Reviews