As I was going through some old stuff in the loft, I found out my long lost spinning tops ( Pambaram in Tamil) that I had played with in my childhood. One was a normal pambaram and the other two were "kondai pambarams" ( with a raised head). The kondai pambarams were gifts from Mary appayee ( my grandma).
I remember, the first activity after buying a top was the insertion of the iron nail. If not hammered carefully or if the top was not of good quality, the nail insertion might crack the top. Sharpening the nail on a rock was an important aspect for a competitive game! The tops that came ready made with the nails were slightly expensive. The rope (saattai) that was used to wind the top usually came in red or white color. The red one was a bit expensive and popular! A metal cap of a soft drink was  flattened and inserted into the rope and helped as a support for the fingers while unwinding the top. 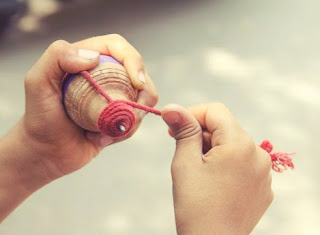 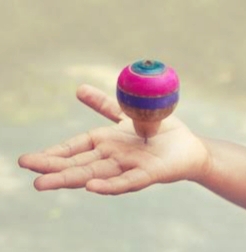 The game i remember playing with my street friends was simple. Everyone needs to spin the top and lift it up with the rope and catch it in the quickest time (abeetu). The one who catches last or the ones who fail to catch or fails to spin the top (going "mattai") are the losers. The losers then have to place their tops inside a circle. The rest will then try to dislodge these tops either by hitting them directly or by dropping them from their hands on top of the losers tops. The wicked aim was to dent or break the losers tops! The dent was called as "aakar" and the action to hit was the "aakar adi". There was a funny punch dialogue that kids used to utter while aiming for the " aakar adi" that invoked the name of 'mangamma' and something that went like "jaadi sonna sine". Iam unable to remember the full dialogue. ( if anyone remembers please add it in the comments)
More the dents, more the shame! The affluent kids, to safeguard their best top, had a spare top (called as " pondatti Pambaram" that translates as the "wife top") to place inside the circle and take the beatings!
It was a game of quick reflex and agility.
The game was usually seasonal and after a few weeks of intense playing, the interests changed and the next season of golly gundu (marbles) or kitti pullu picked up.
Those were " top" days indeed!
The game unfortunately lost out (along with many other local games) with the advent of television and the raise in popularity of Cricket ...