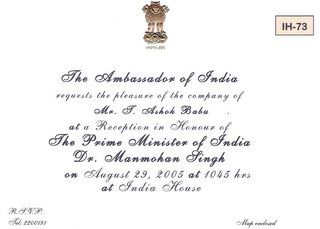 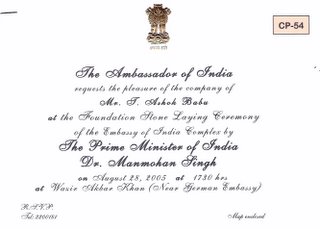 The highlight of August 2005 in Kabul was the visit of PM Manmohan Singh and the future (?!) of Indian Politics Mr.Rahul Gandhi . And the ‘higher-light’ - yours truly was invited to the party hosted to the PM, as I am part of the elite Indian community living here :-) .
India had promised 500 million $ aid and the PM promised an additional 50 million and help in areas of health, agriculture and administration.
Man!- don’t believe if anybody says India is a poor country.
But anyway, I felt very proud of what India is doing for world democracy at the expense of its own poor citizens!

I met in the party a sardar who was a secretary to the minister of Broadcasting and Cultural affairs. He narrated a small anecdote that happened some time back when the Afghan minister for Broadcasting, art and culture visited India for the first time to meet his counterpart (at that time) Mrs.Sushma Swaraj. Mrs.Swaraj told the afghan minister to give her a list of things that he wanted help from India with his broadcasting station.When the minister came up with his list the next day…Mrs.Swaraj couldn’t control her laughter. The Afghan Minister had listed something hilariously similar to this: Sitar- 2 no.s, Tabla- 2 No.s, Keyboard – 1 No., Microphones- 3 no.s and so on…
Mrs. Swaraj was expecting the list to have something like new broadcasting stations, advanced broadcasting equipments, staff training programs, etc…but all that the innocent afghan minister could come up was a few music instruments. He didn’t even have an idea of what to ask! But anyway, our then Indian Minister understood the situation and made her own list and of course along with the list of musical instruments.
from my diary... sept' 2005
Posted by ashok at 12:34 PM