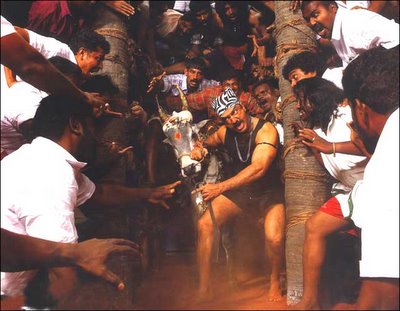 This amazing still stopped my breath.Its from Kamal Hasan's Sandiyar.
(renamed Virumandi due to vandalism by some goons )
Can't believe its a movie still.Just look at the eyes of these guys !
v a l o u r ? p a s s i o n ?
"Jalli kattu"- the 'man & bull' traditional macho game of the Tamils...

One of the most dramatic features of the annual harvest festival (Pongal) in Tamil Nadu -the bull-baiting (jallikattu/ manchu virrattu) events held in villages near Madurai. From miles around, farmers bring their prize animals to compete with hundreds of young men for pride, status and prizes which nowadays range from chicken to bicycles. Traditionally an indirect event to shortlist the stud bulls.

The most famous is the Alanganallur Jallikattu. Madurai avaniapuram and Paalamedu are other famous Jallikattu event locations. When a jallikattu bull is released into the arena it is up to the bravest (or most foolhardy) to try and 'tame' it by clinging on to its hump for a minimum distance, while it charges down the street.There are different versions of the sport in other regions. Unlike in Spanish bull-fighting, the animals aren't too seriously harmed; the same can't be said, unfortunately, for many of the human participants and spectators !

I am appalled to see the sport now a days!Jallikattu today is a degenerated sport... a Bedlam! an unequal fight between a frightened, tortured animal and a fiercely unruly mob with no rules and regulations to govern them...an unfortunate bull, released into a `route', trying to run for its life while the groups of `adventurers' lining on either side subject it to untold suffering by raining blows on the helpless animal. As it tries to escape from these `men of valor', spectators become the unintentional targets for the `ferocious bull'. Absolute pandemonium prevails !

When a bull gathers courage, stops and starts staring back, the mob runs helter skelter resulting in a stampede... There is a mad adventure but no sportsmanship in this. What’s left is just chaos and confusion. The game of valor as i know it from Tamil history has surely lost its virtue. 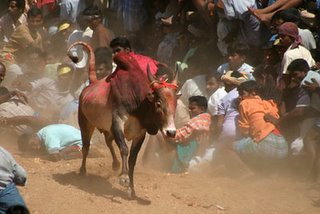 Today, Jallikattu has become a crude show of cruelty to animals resulting in unnecessary loss of lives or horn in the asses.Its a sport that even now attracts quite a number of foreign tourists, most of whom come hearing great stories , but go back seeing something like a mob riot.

It pains me that the true essence of the bull-fight is lost today. Its time the Tamil Nadu government took some serious steps to conduct this historic cultural sport of Tamils in an orderly manner in an arena with barricades to protect the live spectators. Strict sporting rules, organizing regulations and professional event management are the need of the day. The game should be declared a world heritage event ...otherwise its just going to degrade and disappear at some point.
Posted by ashok at 11:13 AM