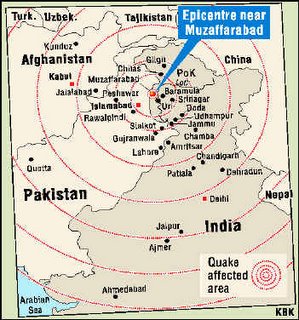 We did experiance a very minor tremor here in kabul today . Ofcourse I didnt realise it was a quake. I was just finishing my shower at that time (must be around 8.20 AM afghan time).I thought i was having a slight dizziness but later found that it was a tremor.
Had it been a major quake here, it would have turned out to be a real bad timing for a shower.Anyway,apart from a slight vibration nothing happened . So I didnt really have to do an "Archemedes-Eureka" run out of my bathroom !
Posted by ashok at 11:47 AM No comments:

The past few days saw a lot of hue and cry over India's vote against Iran in the IAEA.I don’t see any sense in this. What India made was a practical decision and not a sentimental one. Indians have to get out of this sentimental attitude if we want to claim an important place in the world affairs.Some say India should have abstained from voting. India had done enough abstains in the past on different issues. Now we are eying permanent seat in UN and a strategically important position in world politics. India has to be proactive in its international affairs to achieve this end. We have to shake off cold-war ideologies. We have to take some tough decisions.
Common sense will tell anyone why an energy rich country like Iran is too eager to get Nuclear. If its plan is innocent, why did Iran buy its nuclear know-how from Pakistan under the table? Nuclear weapons in the hands of Islamic countries are a danger to the world in general whether they are friendly towards India or not.I see lot of people calling Iran a friend. Fine, what did this friend do when ever India had a war with Pak? Has Iran ever taken a clear stand with India on Kashmir? Right now India sees Nuclear energy as a more practical future for its energy needs than fossil fuel from Iran that may not last forever. This Idea of a pipe line thro Pak from Iran is a myth that any sane mind will laugh at. It is exciting to talk about but ground realities are different.
In real politik, there is no permanent friend or foe. During Kargil war it was Israel that helped us and not Iran or Russia thought to be our friends. The Panchsheel "India-Chini bhai-bhai" propaganda by Pandit Nehru became a joke when china invaded India! Again, it was the US that put pressure on China to cease fire and not our Soviet friends. Iran supplies oil to India not at any concessions for friendship.
In reality - the technology boom, the growing economy and rising status of India is a direct reflection of our growing relations with the west than the middle east.The growth of India as a major world player is inevitable in the future and this is a fact that the rest of the world will learn to accept soon.
So there is no need to be sentimental about what India did in IAEA.Its time India learns to handle and engage other countries at different levels like what the Americans and Chinese do. When ever Americans say something "in the interest of the whole world" its actually "in the interest of the US alone”. India too has to learn this trick. Its time India learnt to be independent, mature , pragmatic and sometimes selfish in its foreign policies.
This Iran vote is in the right direction. India has arrived at last.
Posted by ashok at 11:42 AM No comments:

Bollywood can save a Life !

For Afghanistan, India is the mother culture. Bollywood’s popularity predominates all. A repertoire of Bollywood songs can save your life in Afghanistan, as an Indian executive of the Asian Development Bank discovered in 2002. While on an inspection tour of the Kandahar-Herat road, being reconstructed with ADB aid, he was kidnapped by local Afghan highwaymen. The hapless Indian had forgotten his passport at his camp-site. The highwaymen, thinking he was Pakistani, were ready to kill him. But he established his credentials when he sang a series of Bollywood songs. His captors were delighted and personally escorted him back to his camp — with apologies
excerpt from AFGHAN FILE -Come home to Kandahar
Posted by ashok at 5:39 PM 1 comment: