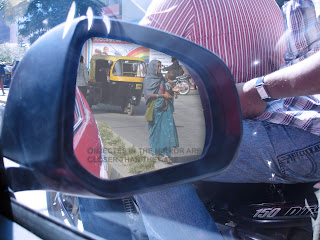 It was the usual Bangalore morning signal jam. He turns off the engine and instinctively locks his side screen to be safe from the usual menace of the eunuchs. He knew it would take at least 5 minutes before the traffic can resume. The traffic cops are busy with their morning collections on the other side of the road. He opens his canister and starts drinking his morning dose of chocolate soyamilk.

He notices her approaching on the rear view mirror. She has an infant against her bosom. Surely it must be a stolen infant he thought. He remembered the story he had recently read in the papers.
It was his firm policy not to give alms to beggars. "Why don’t they earn their bread by hard work? The society breeds them with alms", he always sighed.
Two teens on the bike drop a coin as they gawk at her bosom. That irks him further.
Now she is knocking on his side screen. He looks ahead ignoring her. He could hear the wails of the infant above the voice of the wacky RJ on the FM radio. He is not sure which one bugs him the more. The signal turns green and the traffic upfront begins to move. The infant’s wail drowns the other noises around as it pierces his locked door.

This is not easy he feels.
His one hand takes the 5 rupee coin lying on the dash board while the other hand starts to roll the side screen down.

He turns. She is not there.
He quickly rolls back the side screen, relieved that he did not violate his policy.

Later at office, the infant is still wailing in his head.