My Favorite 9 : Comedians on Screen 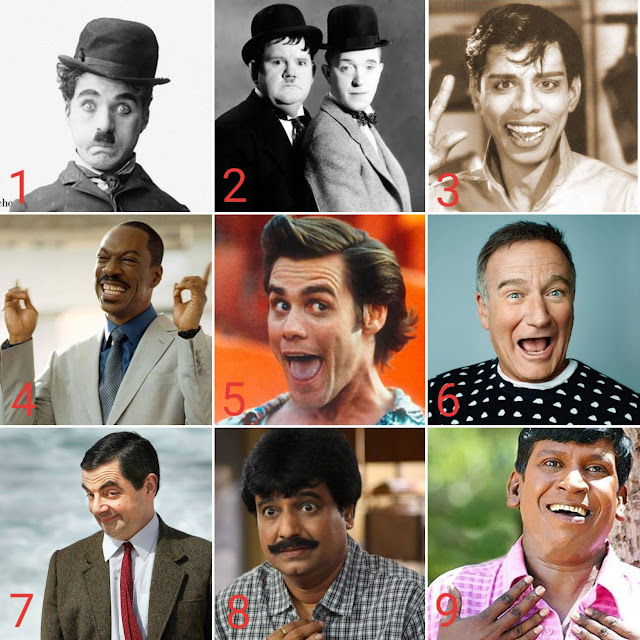 Comedy as they say is Serious business! Its not easy to make people laugh... There is a lot of intelligence, timing and context that go into making a comedy click and connect with the audience..I have a great admiration for the guys who have this knack to tickle our ribs... Here I have listed 9 consistent legends who made me laugh the most on the silver screen...
1. Charlie Chaplin - The Genius who made the world laugh starting from the silent movie era...He strongly conveyed socially and politically important issues by mixing them deftly into his slapstick comedy.
Whenever a Chaplin movie was screened in Madurai, my parents had taken me and my younger brother to watch it. My brother used to dress as Charlie Chaplin and entertain our neighborhood kids!
I was fortunate to watch even his not so famous movies thanks to a Chaplin film fest at Madurai ( in the Twin theatres - Sri Mappilai  Vinayagar & Manikka Vinayagar that used to screen only English movies in those days).
2. Laurel and Hardy - The legendary duo of Stan Laurel and Oliver Hardy entertained us with their rib tickling slap stick comedy! I still remember the first time I watched their movie - It was screened on TV using a VCR at our school when I was in III std. It was a laughter riot to watch along with my class kids!
3. Nagesh - The 'Jerry Lewis' of India.. Nagesh was the first comedian to extensively use body language along with dialogues to make the audience laugh. His performance in Server Sundaram, Thiruvilayadal and Kadhalikka neramillai are the most memorable for me. His popular female comic pair in many films , Manorama  also needs a special mention in this list of comic legends.
4. Eddie Murphy - I think "Coming to America" was the first Murphy movie I saw along with my friend Chella Kumar at the Mappilai Vinayagar Theatre... from then on we never used to miss any Murphy movie!
5. Jim Carrey - One of the most talented Hollywood comedians who caught our attention with "somebody stop me" in "The mask" and made us ROFL with his facial expressions and body language. His "Ace Ventura" series, Liar liar, Dumb & Dumber, Me Myself & Irene and Bruce Almighty are some of my personal favorites.
6. Robin Williams - One of the true legends of comedy! Good morning Vietnam,  Mrs.Doubtfire and Patch Adams are some of his comic masterpieces I greatly enjoyed watching. It was a shock to me that a person who gave so much happiness to the world had so much sadness inside and ended his life due to depression.
7. Rowan Atkinson - Better known as "Mr.Bean" , Atkinson is one of the legends of British comedy. He had a very unique comic style and made us laugh with just his silent actions in the "Mr.Bean" series. I enjoyed his 'Jonny English' series too.
8. Vivek - He was famous for his intelligent and satirical humor that highlighted the social and political ills and evils. His comedy was an indirect (and sometime a direct) take on the pathetic current affairs of our society and its belief systems. No wonder he earned the nickname "chinna kalaivanar" after the legendary satirical comedian Kalaivanar NS Krishnan!
9. Vadivelu - Arguably the greatest comedian of our time. His body language, timing and dialogue delivery can lift a simple fun scene to comic heights!  I have seen his comic on-screen characters around me while growing up in Madurai and can easily relate to his expressions and body language and relish the underlying humor fully.
Who is your favorite?
Posted by ashok at 12:16 PM

Email ThisBlogThis!Share to TwitterShare to FacebookShare to Pinterest
Labels: My Favorites