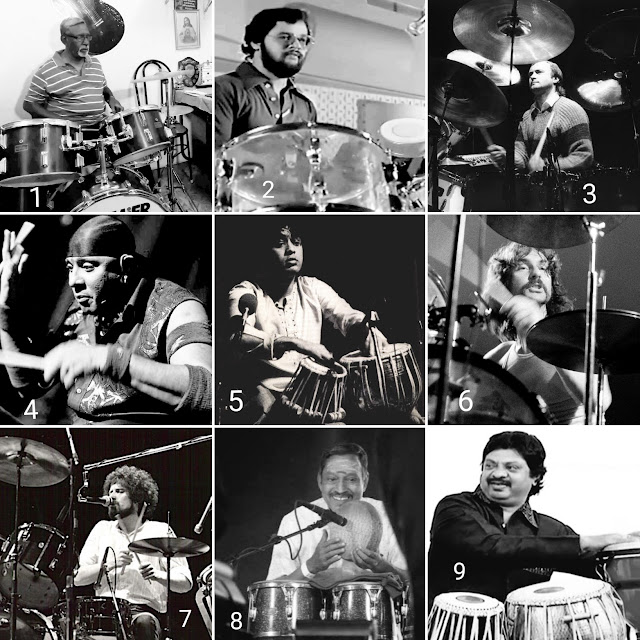 My first interest in percussion started as a 4 year old watching Chanda mama ( my uncle) play the double bongos. Drumming was something that came naturally to me and soon I was drumming on anything I could convert into a drum, like plastic buckets, kitchen containers, metal stools etc. But I never took drumming seriously till college. A new drum kit was purchased for the college band and a drummer was needed. So I just took up the job with both hands & feet and started playing comfortably from day one even though I had no training and have never played the instrument before. Years of hand drumming on the school desk and along movie songs had imbibed in me a good rhythm sense. I was lucky to have Praveen Thiagarajan, another percussion enthusiast like me, as a classmate when I joined School of Architecture and Planning, Chennai, for my masters degree. The jamming sessions at SAC and inter collegiate shows we did are great nostalgic memories for me. Today I look back at some of the legends who had directly or indirectly influenced me as a drummer...
1. JSM Jeevanraj -  Mr. Jeevan was a prominent name in the music circuit of Madurai in the 1980s. His "Jeevan Superstars musical troupe" was a popular local band . He was the first drummer I saw in live action when his troupe played in our TELC Salvation church. The troupe was also popular at wedding reception parties where Mr. Jeevan held the limelight with his cool stick tricks! His son Godwin, was my school classmate and excelled as the drummer of the school band.
2. Puroshothaman - Puru was the chief drummer for Maestro Ilaiyaraaja right from his "annakili" days.  We can see him performing in the song "madai thirandhu". His stylish manual drum can be distinctly heard in the 80s Ilaiyaraaja classics ( listen to the disco number va va pakkam va) and as the percussion moved to rhythm pad / machine fed beats in the late 80s, Puru pioneered that too. (Listen to raja rajadhi rajan indha raja)
3. Phil Collins - Best known as the drummer for the rock band 'Genesis' , Collins is one of the coolest drummer cum vocalist I have seen. I heard his song "Another day in Paradise" performed by the Madurai Vikaasa school band in 1991 and immediately became a Phil Collins fan.
4. Sivamani -  Drums Sivamani is one of India's leading percussionists known for his experimental collaborations with many famous musicians and live performances. He has played for most of the composers of India including legends MSV , Ilaiyaraaja and more recently AR Rahman.
5. Zakir Hussain - Ustad Zakir Hussain is one of the greatest tabla legends of India. His fingers are just magical! I can watch his performance for eternity!
6. Nick Mason - Architect and founder member of Pink Floyd, Mason had a unique laid back style that mesmerized me as a Floyd fan!
7. Don Henley - The drummer and singer of my favorite rock band Eagles . "Hotel California"  still remains my all time favorite and I think I have most enjoyed playing the drum for this song!
8. Sundar Subramaniam - A legend in his own rights, Sundar has played for legends like MSV , Ilaiyaraaja , Naushad, AR Rahman and many more. He plays more than 30 percussion instruments and has been part of many of my favorite Ilaiyaraaja classics. He is a joy to watch on live shows.
9. Nagi - a much under rated percussionist. I first started noticing him in Raja's live concerts, playing with precision and without any flamboyance usually associated with drummers! Nagi has been a part of many super hit Tamil songs.
Posted by ashok at 11:07 PM

Email ThisBlogThis!Share to TwitterShare to FacebookShare to Pinterest
Labels: Music, My Favorites