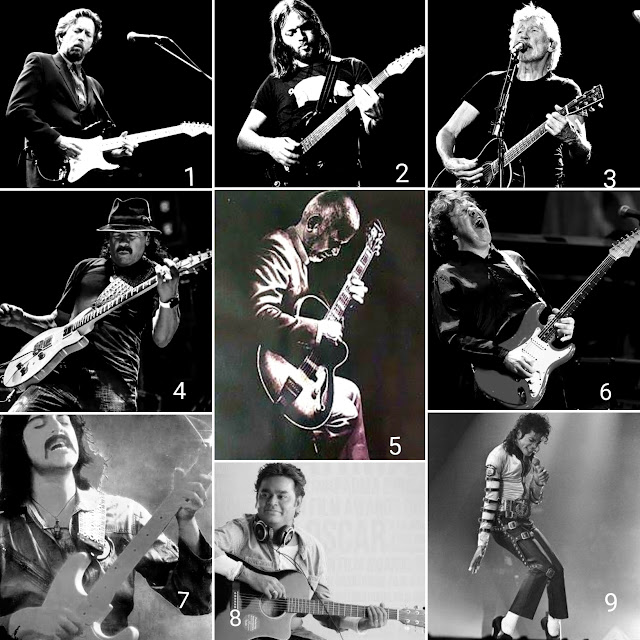 These are 9 of my favorite musicians who have been part of my growing up years.
1. Eric Clapton - One of the greatest guitarists of all times. I heard his song ("wonderful tonight") for the first time from my senior Shamim who created our college's first music band. "Tears in Heaven" which Clapton wrote in memory of his son was one of our favorite songs. As a Bass guitarist I enjoyed playing " Cocaine" in many concerts during my college days!
2. David Gilmour - Pink Floyd had been a great influence during my college days. Pink floyd music filled many of my long nights when I stayed awake on my design table!
3. Roger Waters - Architect and founding member of Pink Floyd along with Nick Mason. "The Wall" written by Waters remains my  favorite till date. I remember my younger days...playing the drum and my friend G.Prabhu (jeep) on guitar singing "the wall" at the terrace of his house, disturbing the whole neighborhood!
4. Carlos Santana  - the legendary Guitarist  ! His album "supernatural" is one of my favorites. I simply love his creativity and style of playing the guitar.
5. Maestro Ilaiyaraaja -  The greatest film music composer India has ever produced. His music has defined every moment of my life from my childhood till now. Even today its Ilayaraaja songs that cover my car's playlist when I travel. All the songs that I have sung so far on stage are songs sung in Ilaiyaraaja's voice!
6. Gary Moore - I fell in love with Blues Music after listening to his "Still got the blues"... He soothed my long starry nights in my 20s.
7. Kourosh Yaghmaei  - I discovered this stylish Iranian singer a decade ago and just fell in love with Persian music of the 70s. I love his song "havar havar" that later came to bollywood as the popular "hawa hawa".
8. A.R.Rahman -  India's leading music composer of immense talent who has won several international accolades including academy awards and the Grammys.
9. Michael Jackson  - My favorite musician (and dancer) as a kid. There is some magic in his numbers!
Posted by ashok at 10:32 PM

Email ThisBlogThis!Share to TwitterShare to FacebookShare to Pinterest
Labels: Music, My Favorites