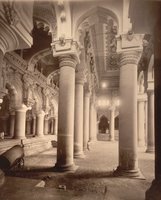 The Mahal - Tirmalai Nayakar's Gothic Palace ...
(Photo by Nicholas and Co in the 1890s)

To the tourists who visit the riotously gaudy temple pagodas that Madurai is famous for, the unmistakable European Gothic (?) style of the 17th century Tirumala Nayak Palace can come as a relief , surprise or even shock !

Tirumala Nayak, who ruled the former kingdom of Madurai between 1623 and 1659, is said to have recruited the services of an Italian architect, (apparently one of the many unknown European adventurers that swarmed these parts before the advent of British colonial rule) , when he designed his royal abode.

Wars and other depredations have left only a quarter of the original building standing today. But even this is enough to awe casual visitors with its massive colonnade of 250 pillars each, measuring 40 feet in height, and connected to each other by foliated arches that form a vast open courtyard. Vast domes stand at the far end of the courtyard, reaching a height of 22.32 metres and surmounting vast spaces over the 'swarga vilasam' or celestial abode, where Thirumala sat enthroned and undoubtedly impressed ambassadors from near and far with his pomp and pelf. 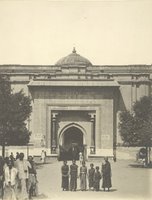 Then ...East gate of the Palace, taken by a photographer of the Archaeological Survey of India (1899) 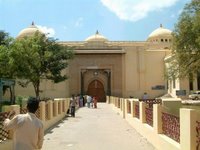 Now...east gate after renovation(2004)
Clearly though, Thirumala had a secular outlook which he gave expression to when he built his own dwelling.


''The admixture of Saracenic forms, developed by the Romans and later spread by the Arabs with Hindu details, is fascinating and singularly picturesque,'' for some.But, not everyone shares this view. The distinguished late art historian Percy Brown, for example, admired the palace as a ''work of considerable magnitude'' but also found it an example of ''architectural regression''. A retired professor of history from Madurai Kamaraj University, R Venkataraman, agrees with Brown,''while the synthesis of three cultures was a unique and a laudable attempt, their individual characteristics could not be successfully assimilated at the palace.The foliated arches are Hindu in form and Mohammedan in application and the columns supporting them Christian, but the overall engineering and designing of the palace is of a high standard,'' 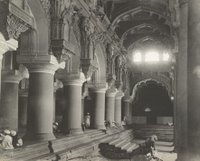 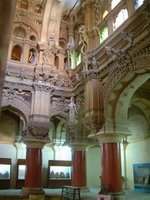 Now...the red giants (2004)
History notes that when Thirumalai first brought his consort to the palace after it was completed built in 1636, she commented that the giant pillars and arches reminded her of a stable for elephants, sending the king into such a rage that he had her confined for the rest of her life. And he took another wife.

Thirumala's grandson Chokkantha Nayak thought nothing of demolishing large portions of the palace and carting off the material to build another palace for himself in the nearby city of Trichy. The British saw fit to use the palace as a horse stable, barracks and, disastrously, as an ammunition dump.But in 1858 Lord Napier, then governor of Madras, allocated 500,000 rupees (five million dollars in today's terms) for restoration work. 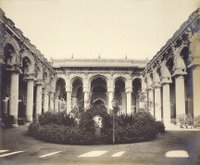 Then...inner courtyard, taken by a photographer Archaeological Survey of India (1899)

Now...The inner court where the amusing light & sound show is organised by the ASI.


With tourist interest in the palace picking up, authorities are beginning to see merit in fresh investments for restoration work. In 2003 the local administration earmarked two million dollars for the construction of a pavement around the monument that could keep encroachments at bay. Another four million dollars has been committed by the state government for the restoration of the stucco work and repair of damaged walls and pillars. The central government's India Tourism Development Corporation has set aside two million dollars to upgrade the sound and light show at the monument, to include laser beams and digital soundtracks and also for the upkeep of a small museum housing rare artefacts from Madurai's different dynasties.

information from : www.ipsnews.net sent to me by Winston and his 13 year old daughter Sarah who is doing a study on Thirumalai Nayakar's life .
old photos : british Library
Posted by ashok at 11:32 AM