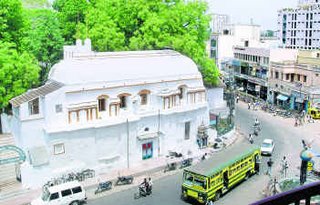 
This Photograph taken by Linnaeous Tripe in 1858 was once used as the Civil Hospital of Madurai .This building actually is the only remains of the old fort of Madurai....actually one of its gateways. The fort consisted of a double wall with moat and was nearly 4000 yards in circumference.This building in dilapidated state can still be seen opposite the Periar Bus stand.I wonder what its being used as now!
Posted by ashok at 9:27 PM