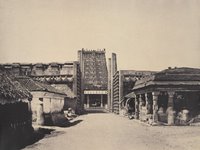 Raja Gopuram from the west of the Meenakshi temple taken by Linnaeus Tripe,1858.The tank seen in front is said to have channels connected to the Vaigai river and the vandiur teppakulam. 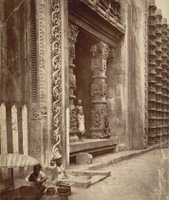 One of the landmarks of Madurai - the Raja Gopuram, that stands unfinished in the Madurai Temple complex. Looking from the size of its base and the intricacy of stone work, iam sure that it was planned to be the grandest and tallest of the towers. Every time i cross it, i get curious to know why it was left as an unfinished saga. Did the ruler (Thirumalai Nayakar) pass away before it could be completed? Did the ruler run out of funds !? One popular theory is that, the architects of the time began to feel doubtful about the quality & load bearing capacity of the stones used for the base and were forced to abandon further work. But iam not satisfied with this theory. Architects and master masons who had built so many stone wonders as a family tradition for centuries, choosing faulty stones and using them upto about 12 mts and then having doubts about it-Seems illogical!But who knows? Iam still waiting for a convincing explaination....
Posted by ashok at 2:53 PM