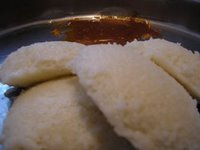 Idli - the most famous south Indian breakfast /dinner/ snack.(Well for those who do not understand what an Idli is, check wikipedia .)
Madurai is the place to be if you are an idli fan! Breakfast is incomplete without idli,vadai & sambar for most people 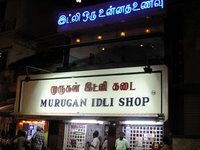 Small Restaurants or eateries like Murugan idli kadai , Otha-panamarthu kadai, Mudaliar idli kadai, Gowri, etc have an 'idli- fan following' of their own.
The way side 'idli kadai aayaas' sometimes surprisingly make softer and tastier idlis than the big restaurants...but you have to sacrifice a little bit of hygiene ! One such 'aayaa idli outlet' near my house, right on top of a drainage channel, is so famous and busy at night time that people wait even half an hour to buy a few idlis!
I fondly remember the "Paapa kadai idli" run by an old lady called Paapa (meaning Baby in Tamil) during my childhood days in West Ponnagaram 12th street at Madurai. I haven't seen better idils made after that...

Idli was one of the main menus in my engineering college hostel.I used to run as far as I could from our hostel mess."Sathak bomb" as we called it, was so hard and heavy that one could break a head with it! But some guys (like Chella) to my disbelief even relished that !

I simply can’t understand the craze that my people (Tamils) have for this white piece of rice cake.Honestly, Idli has never been my favorite snack. If not then why am I writing something about it? Well, If you are from Madurai, there are some things that you can hate but can never ignore or escape. Idli is one such! Longlive Idli!
Posted by ashok at 6:52 PM