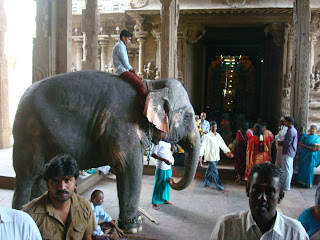 When you hear the jingle of bells followed by the noise of children and barking of street dogs, you can be sure that the Koil-Yaanai (temple elephant) is on your street.


Hindus queue up for its blessings. If the giant raises its trunk in salute and touches your head, you are blessed! Some bring water in a sombu (small metal urn) and the beast sucks it up and blows it on them as a blessing. Yuck!
It’s an irony that such a huge wild beast is turned into a meek beggar, thrusting its trunk from shop to shop for alms. As a kid I watched in awe the huge trunk grasping so precisely the 25 paisa coin from the hands of the shopkeepers!

Some kids enjoy the jumbu ride whereas some terrified kids (like me) are pissed off. I was always over whelmed by this beast. I was 4 years old and brave enough to climb for a ride, but once I sat on the top..ooops!The elephants hairs pricked like needles. My scream would have made the elephant deaf. That was my first and last ride!

When the elephant shits on the street, people run to stamp on it with bare feet. They say it has medicinal values to cure the cracks in the foot. Its pee is also holy for some. People rush to collect it as though its a holy spring! Whatever!

The giant softy strolling lazily thro’ the city has become part of the Madurai streetscape.