Your world is NOT BLACK !

Bollywood ! - if you pick 10 movies in recent times, 5 are copied (they call it influenced/inspired) from hollywood, 3 are remade from kollywood (Tamil) and the origin of the remaining 2 will remain a mystery till the end. And this year bollywood surprised everybody with a movie out of the blue or rather 'Black' !! 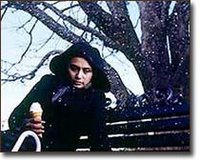 One of my school friends talked about this movie so highly that i forced myself to watch it ...and I was not disappointed for taking the risk.
This was an unusual film for bollywood,even though inspired from "The Miracle Worker".
Superlative performance by Rani Mukherjee as Michelle, a girl who is blind, deaf and mute...living in a 'Black' world! Amitab Bachchan had reserved his best for this film. As Michelle's mentor who guides her fight for success against all odds, he excels beyond words.... Ravi Chandran's classy camera work is the most impressive , doing metaphorical justice to the title of the movie . (The only unimpressive aspect, though minor, was the re-recording by Michael Danna . I could'nt help thinking that the music for such a film should have been done by Ilayaraja or no one else.)

'Black' has been selected by Times magazine as one of the
10 best films of 2005. Well done Sanjay Leela Bhansali .
Posted by ashok at 6:24 PM