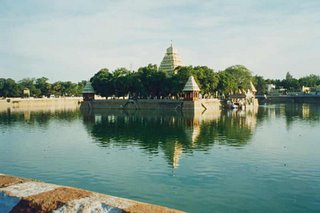 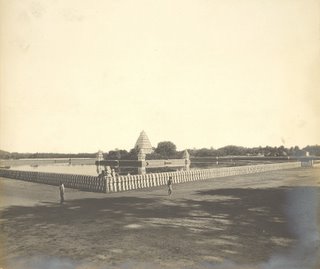 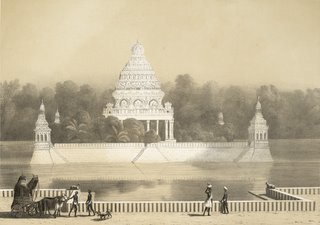 Painting by L.H. Rudder after the original drawing by Prince Aleksandr Mikhailovich Saltuikov , 1848. 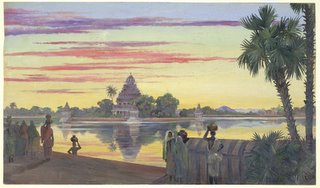 Oil painting on paper depicting the tank at Madurai by Marianne North, dated 1877-79 Photograph , part of the Earl of Jersey Collection- 'India. Bombay to Madras', 1880s


Madurai is dominated by the Meenakshi Sundareshvarar Temple.The earth required for the construction of this temple complex left a huge pit,later converted into a tank. . .
The Mariamman Theppakulam.

Constructed by Tirumala Nayakar, it is situated at the eastern end of the city, about 5 kms from the Temple. It is a large rectangular tank with an island in the middle with a small temple and pavilions at each corner.This Theppakulam at Vandiyur is one of the biggest temple tanks in South India. It is filled with water from underground channels leading from the river Vaigai. The small temple on the square island in the centre houses an idol of Vigneshvara (the hindu elephant god). The tank has three flights of steps on each side.

Theppakulam looks particularly spectacular during the Float Festival every year when the statues of Meenakshi and her consort Sundareshvarar are floated on rafts decorated with lights on the water.

During British rule,the English people drove round and round it every evening and made that drive their chief gossiping spot.

One of the most beautiful landmarks of Madurai when full of water. But when dry, its a popular cricket ground for hundreds of kids at a time!
(photos, courtesy British library)
Posted by ashok at 5:29 PM