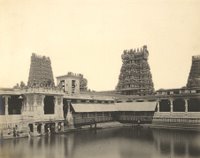 Pond from the north-west, taken by a photographer of the Archaeological Survey of India in 1899 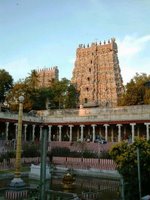 The Pond today (2005). This Pond literally is the Center of Madurai.The 40 m x 60 m is surrounded by stone steps enabling devotees to bathe. 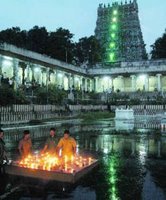 
Legend of The Potramaraikulam...
The history of this pond is as old as Madurai itself.When Kumari Kandam sank into the Indian ocean by repeated deluges, the TenMadurai of the Mudhal Sangam age and Kabadapuram of Idai sangam age submerged into the ocean depths. Later down history, the Pandyan Kings were on the look out for a place to build a new capital that will recapture the legendary glory of the sunken Madurai of their forefathers. According to legend , some merchants passing through a forest known as Kadambavanam saw a beautiful lotus pond and a wooden temple on its bank.They were so fascinated by this location that they reported about it to their king Kulasekara Pandian on return. Soon a 'lotus shaped' city was planned with the pond and temple as its center.
The lotus tank evolved into an important city center in the height of the last Pandian era. The area around this pond was the meeting place of the Kadai Sangam - the last of the ancient academy of poets.

The pond is now a source of too many myths or rather jokes…One is about the Tamil sangam… The story goes that the academy judged the worth of any work of literature presented before it by throwing it into this pond. Only those that did not sink were considered worthy of attention. Another joke i heard is that , the pond is the drop of nectare that fell form Shiva's hair and hence the city was named madurapuri (drop of nectare)! Iam pained to see that reputable and learned people of the city saying stuff like this and making a mockery of our great Sangam culture and our basic common sence!
Posted by ashok at 4:12 PM